The Myth: Working with funds or financial managers that did well in the past is a good method of indicating which funds or managers will do well in the future.

The Truth: Past performance is no guarantee of future success.

One of the first things most people do before investing is look at a fund’s (or firm’s) record of accomplishment, aiming to find ones with a record of returns that beat a financial benchmark. In fact, the funds and firms depend on people doing so. Unfortunately, the disclaimer you’ve heard is true: “Past performance does not guarantee future results.” There’s no evidence of a long-term correlation. None.

In addition, the information provided about a fund’s returns are not the whole story. Brokerages may have hundreds or thousands of mutual funds that contain different mixes of the asset classes. By random chance, some will do well while others will not. What these funds advertise, but don’t explain, is that one of their funds achieved the “past performance” results that they promote. They don’t mention that all its other funds fell short of that level of performance. When you’re looking at past performance, remember that you’re only seeing part of the picture.

This is like misinterpreting the sign posted in casinos that reads something like, “We Pay Back 92% of Your Money!” (The exclamation mark is intended to make you believe that this is a good thing.) And 92% out of 100 is good – until you realize that it means that, on average, the best a gambler can hope to do is lose only 8% of his money. (Some people will win more than this average and some people will lose more.) Expecting a fund to achieve the same performance as it did the previous year is just gambling with your investment.

Mutual funds, retail brokers and financial advisors aggressively market funds awarded four and five stars by Morningstar, the Chicago-based arbiter of investment performance. But the rating system merely identifies funds that performed well in the past; it provides no help in finding future winners. The search for top-performing stock funds is an exercise that will come to be viewed as one of the great financial follies of the late 20th century.

As the chart below illustrates, the reality is that even the top funds rarely exhibit the same performance for even two consecutive years. 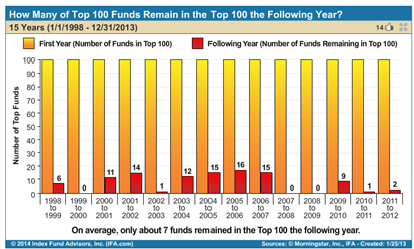 Funds focus on “past performance” for one simple reason: because it works in attracting new investment. A Wall Street Journal and Morningstar study found that 72% of consumers invested their money in four- and five-star-rated mutual funds that showed the highest returns during the previous three–five years.